Lighter the Light Hedgehog is a 21 year old hedgehog formed by light. His abilities help others. He has 5 super forms.

Hes also known as the Hedeghog of Light. His nickname is Light. He fights for justice. The day he was born is August 2nd. His partner is Tynic. He has worked with him multiple times. He tends to rely on his control over elements, as it has won him most of his fights. That is what Lighter likes about Tynic. He light blue hedgehog. He is the one who made Tynic's gloves and shoes. He tought Tynic how to use the Ultimate Lightning Strike. His attacks cannot be avoided. 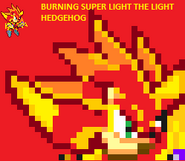 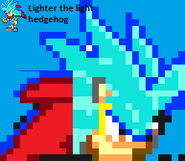 Add a photo to this gallery
Retrieved from "https://sonicheroesfanon.fandom.com/wiki/Lighter_the_Light_Hegdehog?oldid=5713"
Community content is available under CC-BY-SA unless otherwise noted.